Of all the advice for moms out there, discipline is the one associated with the most guilt.  Are we doing the right thing?  Will my child grow up to hate me?  Or will my child grow up thinking he can get away with anything he wants?  Ditch that worry because you can now use these six positive discipline steps at home to change our child’s behavior for good.

Were you punished as a kid?

You know what I mean…

Maybe you forgot to do the dishes and so your parents took away your Nintendo for a week.

Or possibly you didn’t do what a teacher asked at school so you got grounded for a week.

Basically, it boils down to you did something socially undesirable and so your parents took away something you loved that had absolutely NOTHING to do with the action you took.

They said it was for your own good.

Frankly, it just made you really mad at them.

Or even worse, it made you mad at yourself – you’re a bad person who always makes mistakes.

And how mistakes are a terrible, horrible, no-good, very bad thing.

Our childhood has so much influence on the adults we become. But before we start blaming our parents, they were doing exactly what they thought best.

Thankfully, we now know there is a better way to discipline our own kids.

And doesn’t make you a doormat. 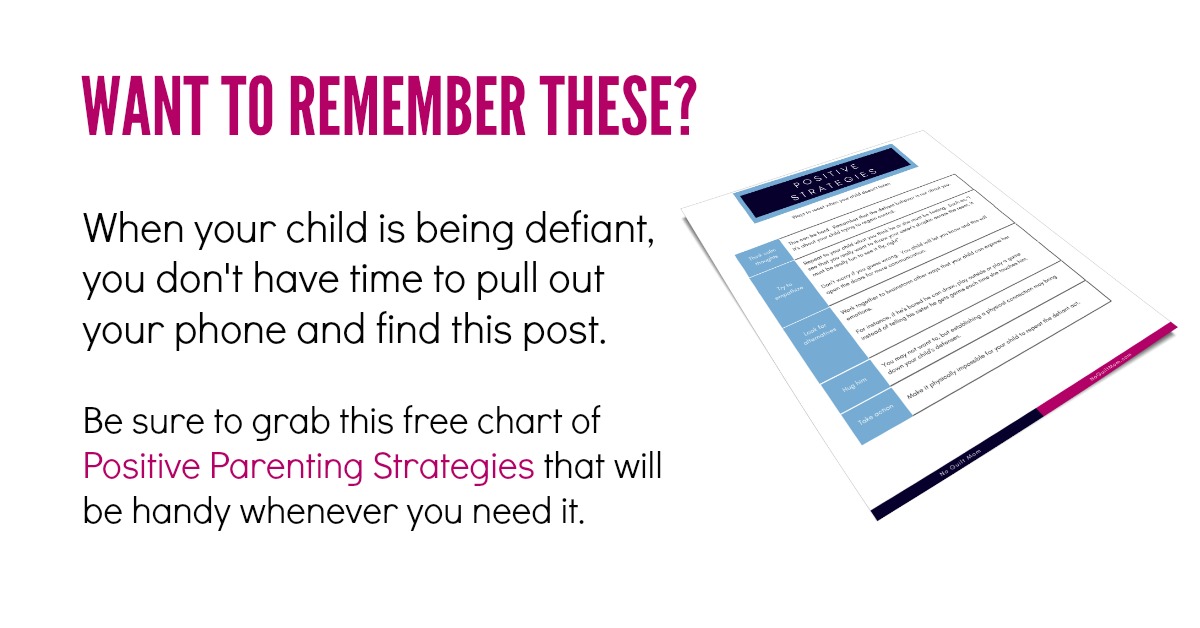 WHAT IS POSITIVE DISCIPLINE?

I am not someone for blindly praising kids. Confident kids who have that confidence based in false praise do nothing for the world.

Positive discipline is not that.

All things we want for our kids, right?

How does this play at our home?

Here is a simple, six-step process you can use for any behavior you encounter.

Want something you can use right this second?  Here are 2 quick tips.

STEP 1: SHARE YOUR FEELINGS WITHOUT COMING DOWN ON THE KID

My 4-year-old son has one regular job in the kitchen: Put away the clean silverware from the dishwasher.

Each time I ask him to do it, he tells me how much his stomach hurts and how he’s too tired right now to put away the dishes.

It drives me insane. Every night, I brace myself for the mountain of complaining that he’s going to smack down in the kitchen.

Last night, he pushed me to my limit. As he dragged across the kitchen, acting as if the silverware basket was way too heavy for him, he stumbled and spilled clean butter knives onto our tile floor.

I wanted to yell at him…to say, “LOOK WHAT YOU DID!”

Instead, I took my feelings (and all the rage that came with them) and told him:

“I am SO MAD!! All that clean silverware just fell on the floor. I’m FURIOUS!”

I didn’t blame him. I summoned the political phrase of “mistakes were made.”

He looked up at me and said, “Sorry, mommy…”

Read more about how to discuss feelings with your child.

Now, I needed to follow it up so that he could take the steps necessary to make amends.

I crouched down to his level and told him – still mad, I did not conceal the frustration in my voice.

He was still listening…

STEP 3: LET THEM MAKE IT BETTER

Then, since he is four, I told him explicitly what he could do to make it better.

“To make this better, you should pick up all the silverware from the floor and put in the drawer without complaining.”

With older kids, you can always say, “I trust you will find a way to fix this”

With my son, this was the last step he needed. He did what I asked. No complaining. No whining about how he was “too bored” to do it.

Say that didn’t work though. What are your options then?

If you have a toddler, they will respond better to the suggestions here.

STEP 4: GIVE THEM A CHOICE

Here’s where it gets a little difficult. With chores, your end goal is for your child to complete their assigned task.

What choice can you give them?

For me, it came down to a now or later. But not too much later… a later that I strictly defined.

My next move would have been,

Either way, the silverware gets put away. But now he has the choice of when to do it.

If he still continued the complaining?

STEP 5: MAKE THE CHOICE FOR THEM

That is your cue to take action and make the choice for them.

At this point, I would pick him up and physically remove him from the kitchen and place him in the other room to calm down.

I can even tell him, “Looks like you chose to calm down in the other room.”

If this process works and he comes back calm, then victory!

But if it doesn’t, you are not alone. Every child is different.

What works for one doesn’t work for another. When one child has to be told once, another may need this process repeated 3 times until he calms down.

Your next step is to do something so that the behavior doesn’t occur again.

It simply can’t occur because you’ve taken the steps to correct it.

Next time my son complains about unloading silverware, I simply leave the kitchen.

It’s a natural consequence to my son because I’ve told him I don’t like the whining and complaining. I leave the room so I can’t hear it.

If these six steps don’t work to correct the behavior, that doesn’t mean its time for punishment.