When Anna Hyatt Huntington was looking for a place to showcase her sculptures, she and husband Archer Milton Huntington came across the 9,100-acre property that would become Brookgreen Gardens. Located in Georgetown County, South Carolina, the gardens were originally one of four rice plantations that the couple purchased. The Huntingtons first visited the property in 1929, and Brookgreen Gardens opened in 1932 as the country’s first public sculpture garden. The property features themed gardens with figurative sculptures, a small zoo, and a nature exhibition center. 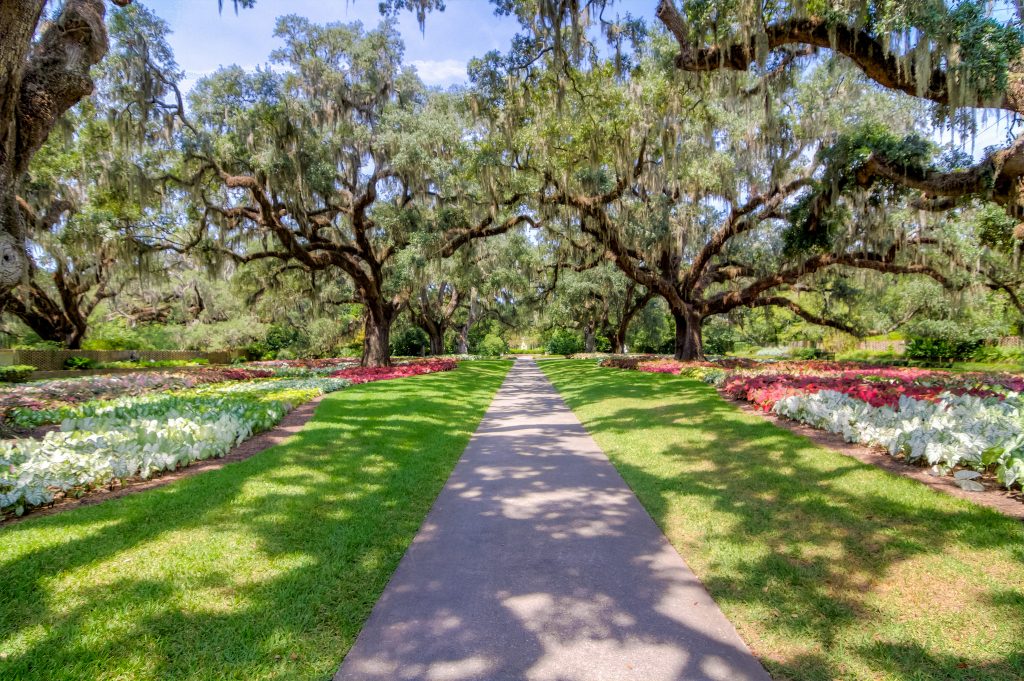 Also known as Fly Ranch Geyser, the small geothermal geyser was accidentally created during well drilling in 1964 when the well was either not capped correctly or left unplugged. This caused dissolved minerals to accumulate, creating the travertine mound where the geyser sits and continues to grow. Water is constantly being released from Fly Geyser, sometimes reaching up to five feet (1.5 meters) in the air. In June 2016, the Burning Man Project purchased the Fly Ranch, where the geyser is located, and the property is currently closed to the public.

Just 36 miles southeast of Wilcox, Arizona, is the Chiricahua National Monument, established in 1924 to protect the Faraway Ranch as well as the hoodoos and balancing rocks remaining from a volcanic eruption 27 million years ago. Thick ash spewed from the Turkey Creek Caldera, cooled, and hardened, laying down nearly 2,000 feet (600 meters) of ash and pumice. This eventually led to erosion, creating the natural features currently seen at the monument. 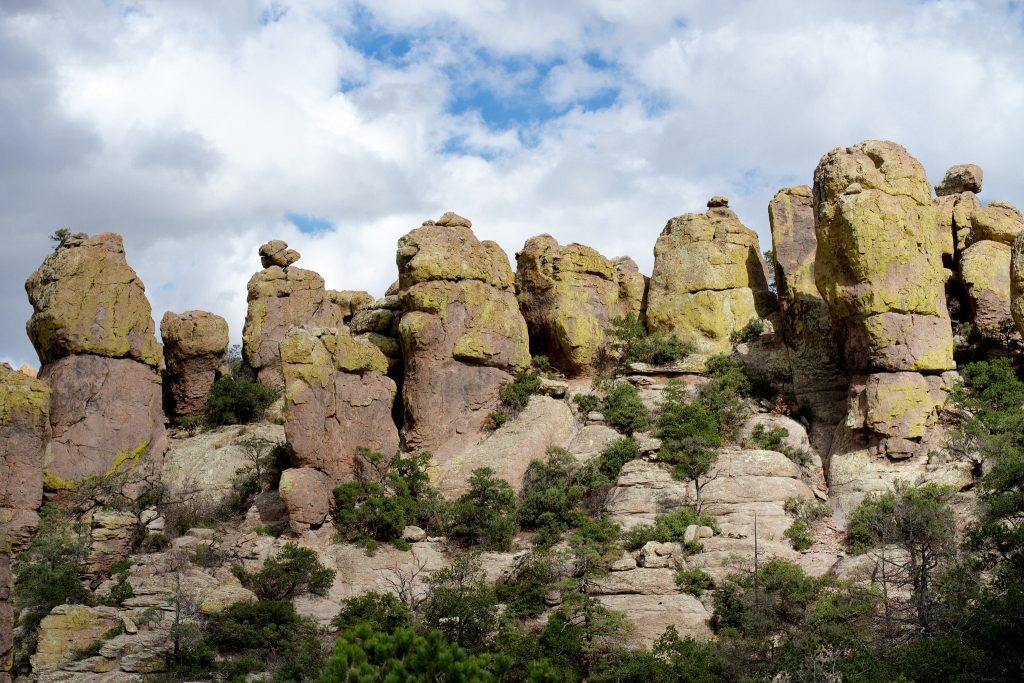 Deep inside a mountain in east Tennessee is The Lost Sea, part of the historic Craighead Caverns cave system and listed by the Guinness Book of World Records as America’s largest underground lake. The Lost Sea was first discovered by settlers in the 1820s, again by Confederate soldiers in 1863, and once more in 1905 by a 13-year old boy named Ben Sands: as he wiggled through the cave’s muddy opening, 300 feet (91.4 meters) underground, he found himself in a room half filled with water. He described how he threw mudballs into the blackness that surrounded him, and hear nothing but splashes. The expansiveness of the Lost Sea is still unknown, but the visible part is 800 feet long by 220 feet wide (244 by 67 feet). More than 13 acres of water have been mapped, but no end to the lake has yet been found.

East of Santa Fe and south of Pecos in New Mexico is the Pecos National Historical Park. It was first a state monument in 1935 and was expanded and renamed a park in 1990. The park’s main unit is the Pecos Pueblo, a Native American community of rock and mud villages built around AD 1100. Thousands of acres of the landscape feature prehistoric archaeological ruins, a battlefield from the American Civil War, and the remains of a Spanish mission built in the early 17th century. There is a 1.25-mile (2-km) self-guided trail that winds through the Pecos Pueblo and the mission.

The Grand Prismatic Spring in Yellowstone National Park is the largest hot spring in the United States and the third largest in the world. The earliest records of the spring are from European explorers from the 1800s who crossed the Midway Geyser Basin and noted a “boiling lake.” The bright rainbow colors of the spring are the result of microbial mats around the edges of the water, which is rich in minerals. Grand Prismatic Spring discharges about 560 gallons (2120 liters) of water per minute. 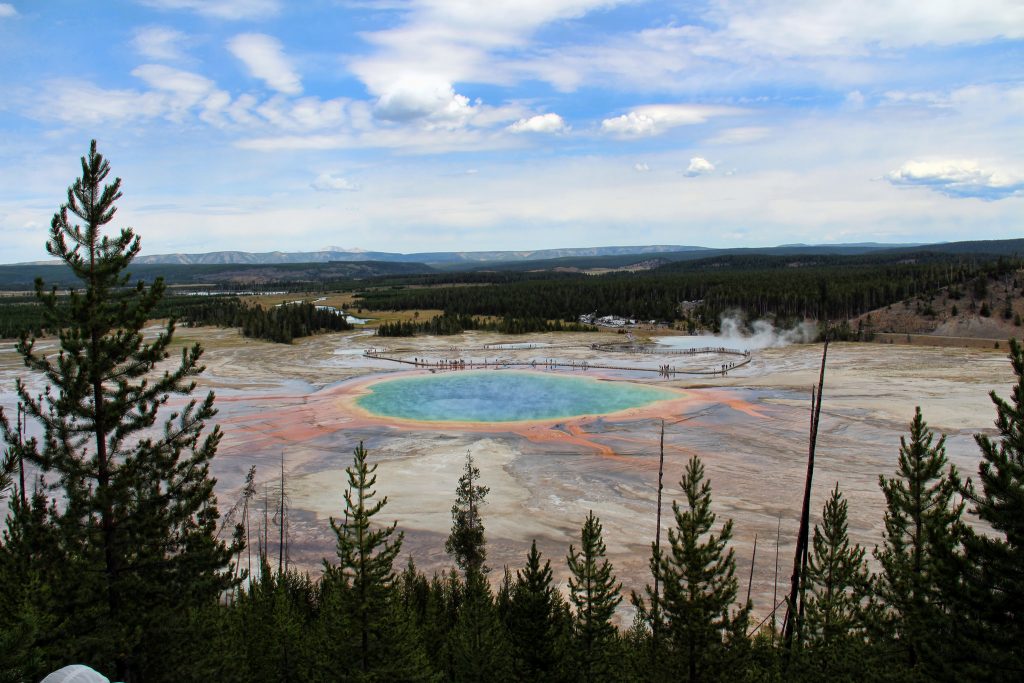 Composed of over 16 million bricks, Fort Jefferson is the largest brick masonry structure in America and is located within the Dry Tortugas National Park, about 70 miles west of Key West, Florida. The unfinished coastal fortress can be reached by ferry, approximately 70 miles (112.65 kilometers) west from Key West, and visitors generally spend several hours here. The fort has a museum and bookstore, and it allows swimming and snorkeling on the reef. The fort was named after President Thomas Jefferson and was constructed in part by civilian carpenters, general laborers, and Key West slaves employed by the United States Army. 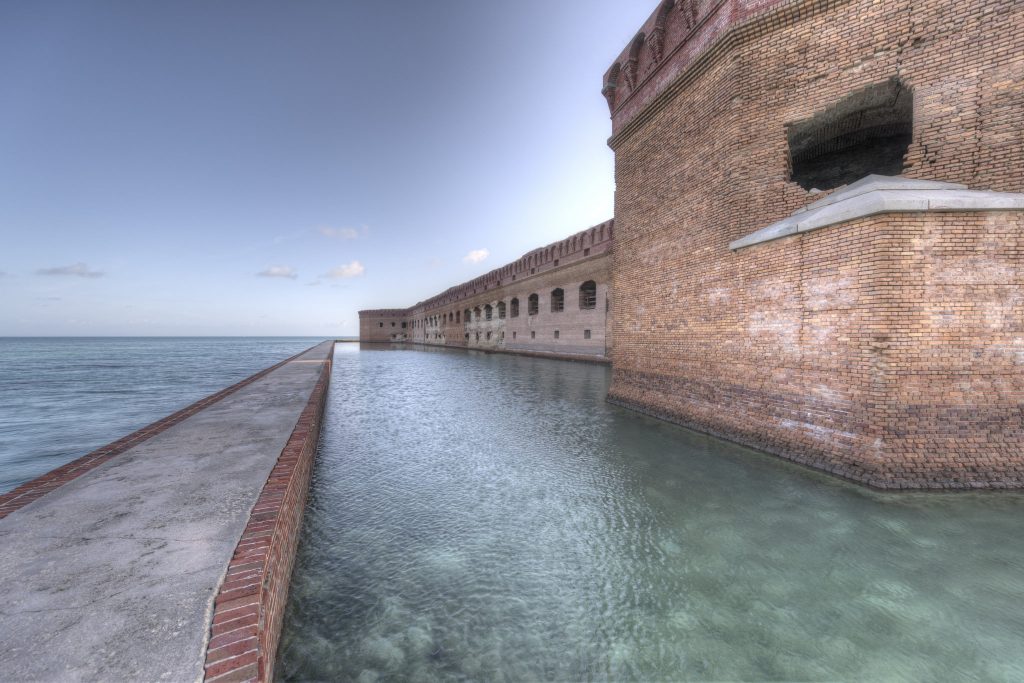 In the southernmost part of Illinois is the Cache River State Natural Area, situated within a floodplain carved by glacial floodwater from the Ohio River. The wetlands in the area are so vital to migrating waterfowl that the Ramsar Convention designated them a Wetland of International Importance, alongside only 18 other wetlands in the U.S. Many of the cypress trees in the area’s 14,960 acres are over 1,000 years old and exceed 40 feet (12.2 meters) in circumference. Visitors can enjoy several recreational activities, such as hiking, canoeing, biking, and fishing. 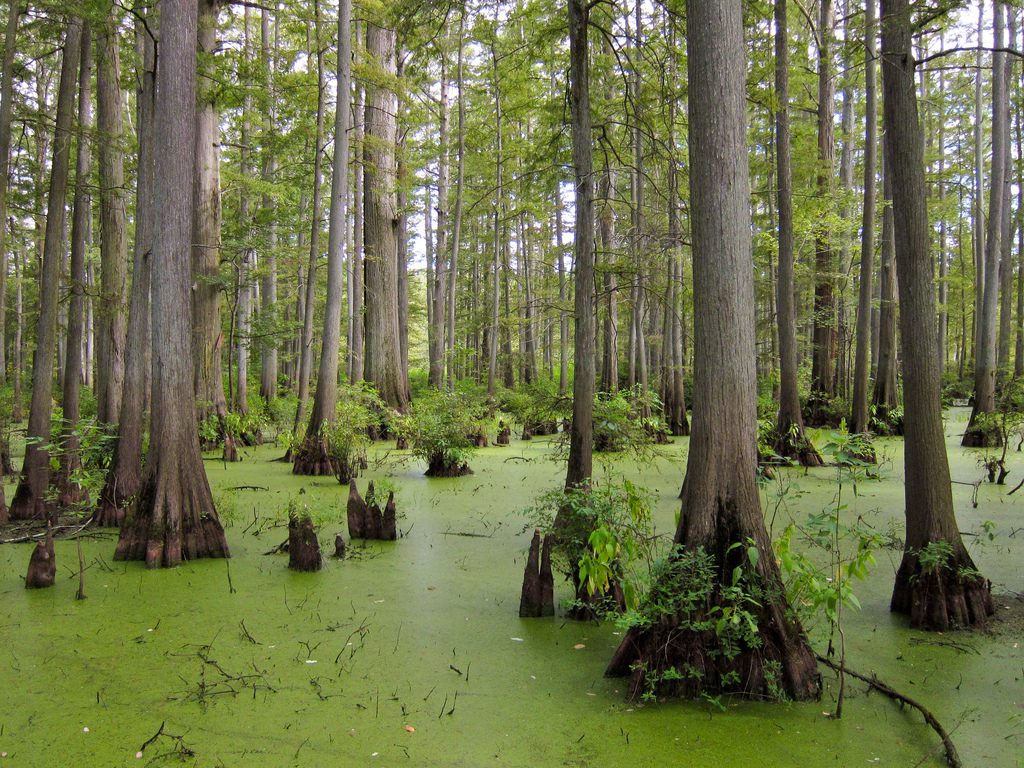 More than 15 million Mexican free-tailed bats call Bracken Cave, the largest bat colony is the in the world, home during the summer, less than 20 miles from downtown San Antonio. The bats fly nearly 1,000 miles from Mexico to the cave, and between March and October, they emerge in the evening hours to hunt insects and moths that are pushed away from crops by the wind. Access to the cave is restricted, but Bat Conservation International does offer evening tours to watch the bats emerge from the cave. 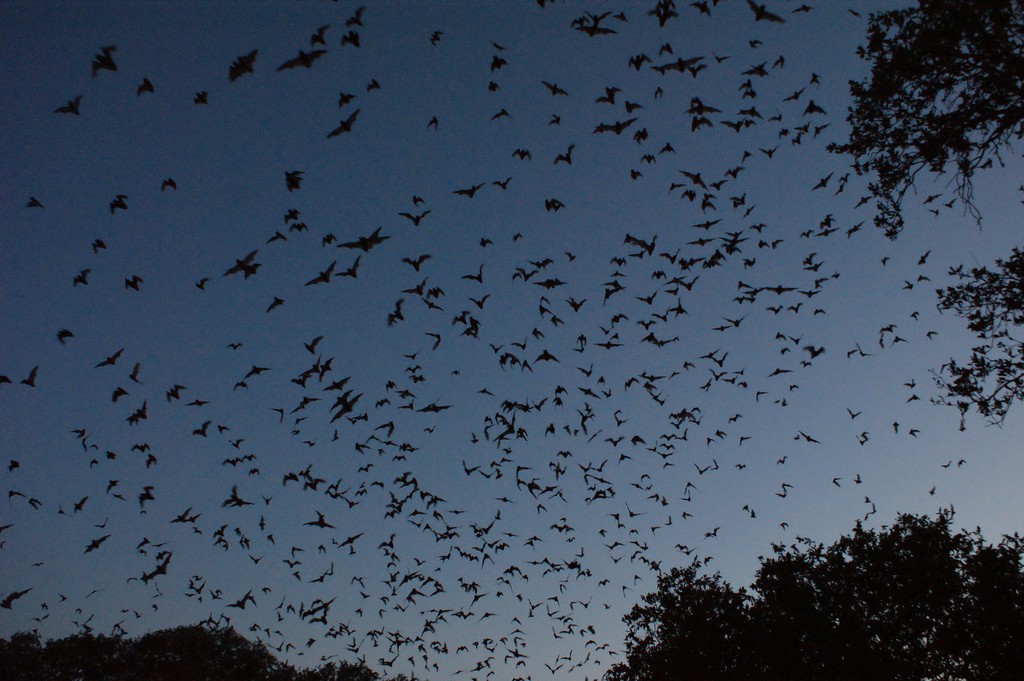 Grand Teton National Park covers 310,000 acres in Wyoming, including the Teton Range, and is named after the tallest mountain in the range, Grand Teton. More than 1,000 species of plants, 300 species of birds, and a dozen species of fish call the park home. Some of the rocks are nearly 2.7 billion years old, the oldest found in any national park in the United States. The park has more than 1,000 campsites, over 200 miles of hiking trails, and is one of the few places to catch the fine-spotted cutthroat trout.

Plaza Blanca was made famous by the paintings of Georgia O’Keeffe. The artist visited the area in 1929 and was amazed by the lights and shapes she found in the New Mexico desert. She discovered the outcroppings of dark rock, which she called “Black Place” and inspired her Black Mesa Landscape piece. In 1940, she painted an oil canvas that was inspired by Plaza Blanca, which she called The White Place. She eventually made the nearby Abiquiu her home. The Dar Al Islam Education Center and Mosque, which currently contains Plaza Blanca, is privately owned but does allow visitors access. 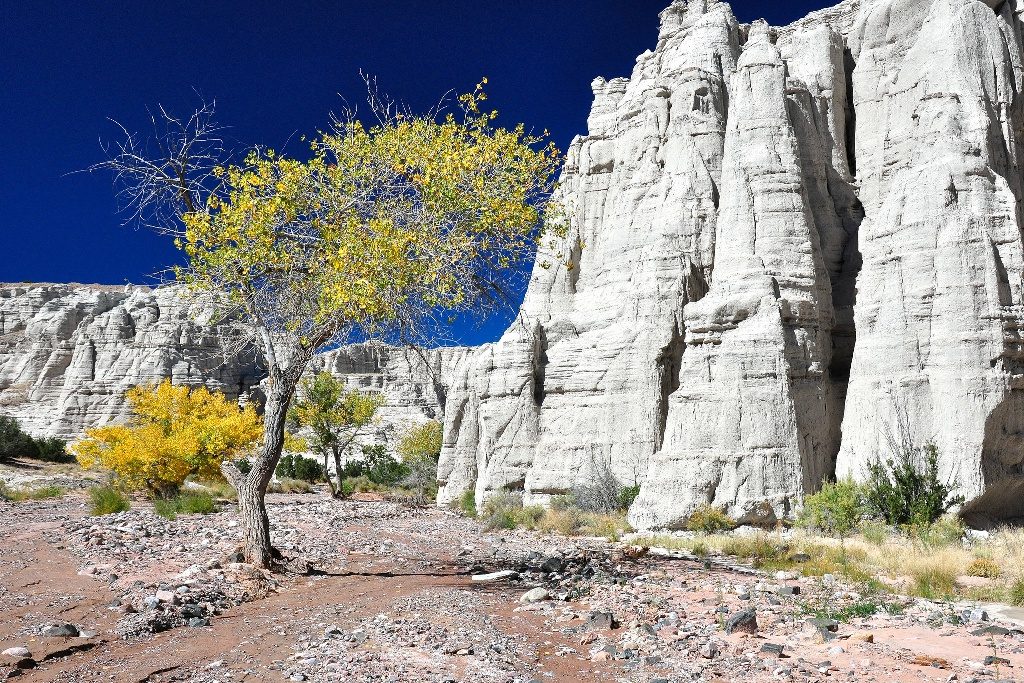